Doctors in India performed a successful surgery on a seven-month-old baby boy with giant head measuring 96cm in circumference — that is among the world's largest.

The doctors have removed 3.7 liters of fluid from baby’s head and managed to reduce the size of the head to 70cm in the past one and a half month’s of treatment

Dr Dilip Parida, superintendent of the AIIMS hospital at Bhuwaneshwar, said: “The child was admitted with us since November 20. The head was containing almost 5.5 liters of fluid inside that. Till now we have removed 3.7 liters of fluid so far by external ventricular drainage. Subsequently, we have placed a stunt inside baby head which is working perfectly. Now, the circumference of the head has come down from 96cm to 70cm. The cognitive functions of the child have improved a lot. The child is stable and has responded well to the treatment. Since the cranial bones are not fused and floating, now the real challenge is to find a way to adjust the cranial bones. We have applied bandages around the skull and planning to do cranoplasty at a later stage, if required. The baby was absolutely bed-ridden earlier, now it can take turns. We are happy with the developments and the parents are also happy to see the improvements,” says Dr Parida.

Roona Begum, a Tripura-born girl had made headlines around the world after her head swelled up to 94 cm due to the same medical condition in 2011.

According to medical records, Roona Bengam’s head was the largest. “We are checking medical records across the globe to verify if an hydrocephalus existed of an even bigger size,” says Dr Parida.

Mrityunjay’s parents — Kamalesh Das and Kavita — are from Ranpur of Nayagarh district, India. Kamalesh, 35, works as a daily wage worker in Kolkata, while his wife is a homemaker who lives in Ranpur.

"We didn’t know what to do, where to go? After making rounds of many 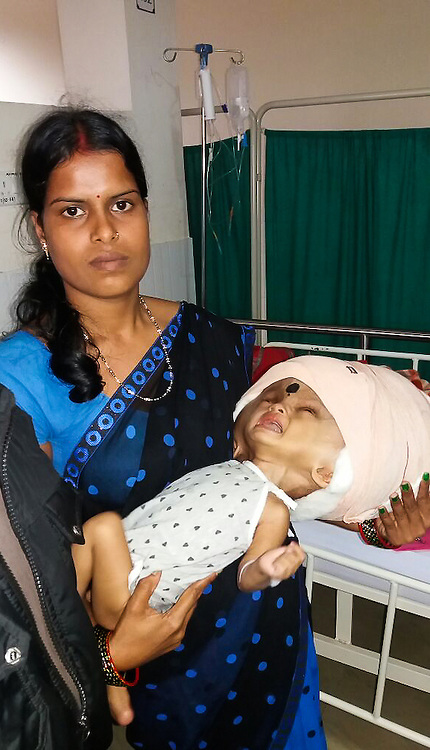