Miss Kim is 20. She lives in Pyongyang, North Korea's display window. She's studying
English. First of her class, she was lucky enough to come with me during my 6th trip to
North Korea as an assistant guide. She had never previously left Pyongyang. It was a
unique opportunity for her to visit her own country and to get to meet and speak to a
foreigner. She was shy at first, but became quite talkative as the days went on, and
describe to me the everyday lives of young North Koreans. Without ever crossing over
the Party line...
Small chats between friends who will never meet again…

-Why doesn’t English or American pop music reach your country?
-Mr Eric, because it is not what we like to listen to... But we know Mozart, Bach and Beethoven!

-Why do boys and girls not dance together?
-They are shy, do you dance with girls that you don’t know Mr.Eric?

-What is the criteria for beauty in North Korea?
-Mr Eric, a woman should have big eyes, a high nose, a small mouth and a white skin, and she should not be skinny. Women in North Korea are truely beautiful flowers.

-Nobody dyes their hair in North Korea?
-No. We need to respect the haircut regulation, we have a lot of choice! -But don’t you want to have the haircut you want?
-No, that’s the last thing we’re concerned about.

-Do you have any idea of the lastest European fashions? -No, Mr. Eric.
-Young people buy jeans in which there are holes. -Holes?
-Yes, they buy worn jeans or which have been ripped. -I don't believe you Mr.Eric, you are joking.

-Do you know the name of this character on the tshirt? -No Mr Eric. It's just a mouse. It’s Chinese!


-Is this a computer, Mr Eric?
-No.This is an ipad. You can listen to music, watch videos, and check emails.
-Really?
-It even has an applicatio 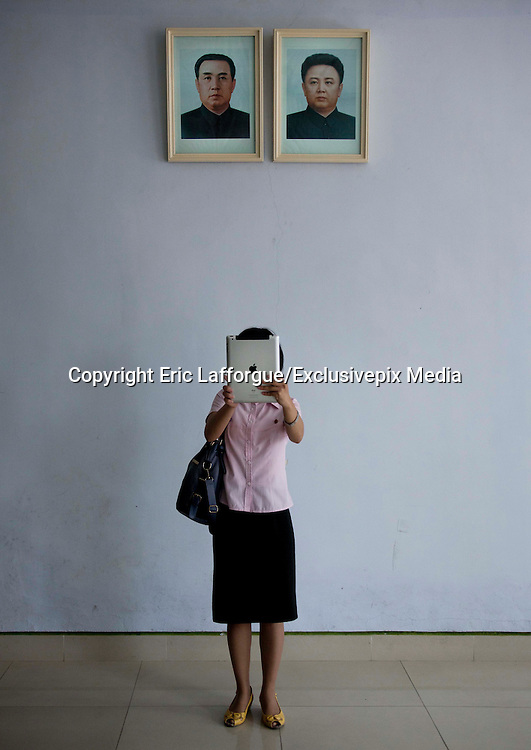