Life on Mars: Nasa commissions artist to creates mesmerizing photographs of what exploring the red planet will be like

Life on Mars: Nasa commissions artist to creates mesmerizing photographs of what exploring the red planet will be like

Artists Nicholas Kahn and Richard Selesnick were asked by NASA to create photographs depicting their fantasies of Mars, the planet they had pretended to explore since they were young.
Only now as grown ups, the usual alien encounters and bursting stars of their childhood days are gone and the two have created extraordinarily thoughtful and complex visions of Mars and humanity's future.
In their collaboration, Mars: Adrift on the Hourglass Sea, two female explorers wander a ruinous, red landscape, surviving together to find and face the unknown.
'It seemed like all the future was about space travel and then it sort of petered off,' Mr Kahn said to Wired.
'So we have these kinds of longings of the future … the great age of space travel, so we’re kind of keeping these longings out there for other people who it might seem exciting to again.'
NASA approached the pair after they exhibited a series of images based on the moon, called the Apollo Prophecies.
Bert Ulrich, a NASA media relations contact, told them that 'Mars is where we're going to next' and asked that the artists focus on the fourth planet from the sun.
'We didn’t start thinking about Mars until they told us to.'
Mr Ulrich showed them high-resolution photo-mosaic panoramas taken by the Mars rovers Spirit and Opportunity and they were instantly inspired.
'The thought that these diligent little machines were inching their way across this distant inhospitable land sending these pictures back to us – it just seemed awe-inspiring,' Mr Selesnick said.
Playing with ideas of past, present and future, the two toyed with time as a central aspect of the piece.
'In the "Hourglass Sea" we set ourselves free to let the project somehow encompass millennia, right back or forward to a time when Mars had surface water. To do this we had to let go of many of our own linear, narrative notions, which we 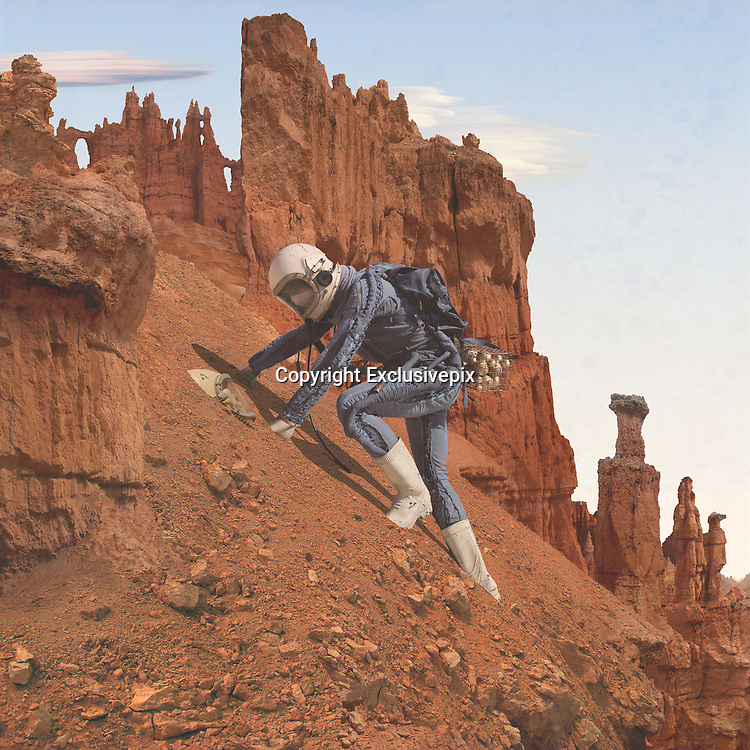