Swimming elephants in the Andaman Islands

Swimming elephants in the Andaman Islands

The Andaman islands are a piece of India sparkled in the Bay of Bengal long closed to foreigners. A thousand kilometers from the coasts of the Indian subcontinent, this archipelago of over 500 isles -of which 27 are inhabited- are covered year-round in dense tropical vegetation. Elephants are used here in the timber industry and enjoy a swim when they are displaced from one island to another.

Indians call this archipelago “kala pani” or “dark waters”. But the Andaman islands, set in the green waters and limpid waves of the Bay of Bengal, hardly deserve this foreboding description. Closer to Burma and to Indonesia than to India, the Andamans were originally peopled by Negritos, an Asian pygmy tribe living as in the Neolithic Age. The islands were converted into a penitentiary locality by the British in 1857, date of the “sepoy rebellion” which claimed many English lives in Lucknow, India.

The Andamans were opened to Indian immigration after independance in 1947. But the door was kept closed on many islands to preserve the lifestyle of the original inhabitants. To this day, tourists are allowed only into the capital, Port Blair, and to the islands of Jolly Buoy and Cinque.

Forested lands cover three-quarters of the 4,000 square kilometers or so which comprise the islands, featuring varieties from Burma, Indonesia and India. Settlers include exiled Karens from Burma, Bengali Hindus who fled the former East Pakistan in the Sixties and immigrants from Bihar, India and Malaysia.

Most of this population of 200,000 thrive from the timber industry and enjoy the precious help of elephants to transport cut wood. A most environment-friendly means of moving timber which avoids having to build roads through forested land. Despite their 4,5-ton mass, the elephants are able to move on jungle tracks with ease.
©Olivier Blaise/Exclusivepix 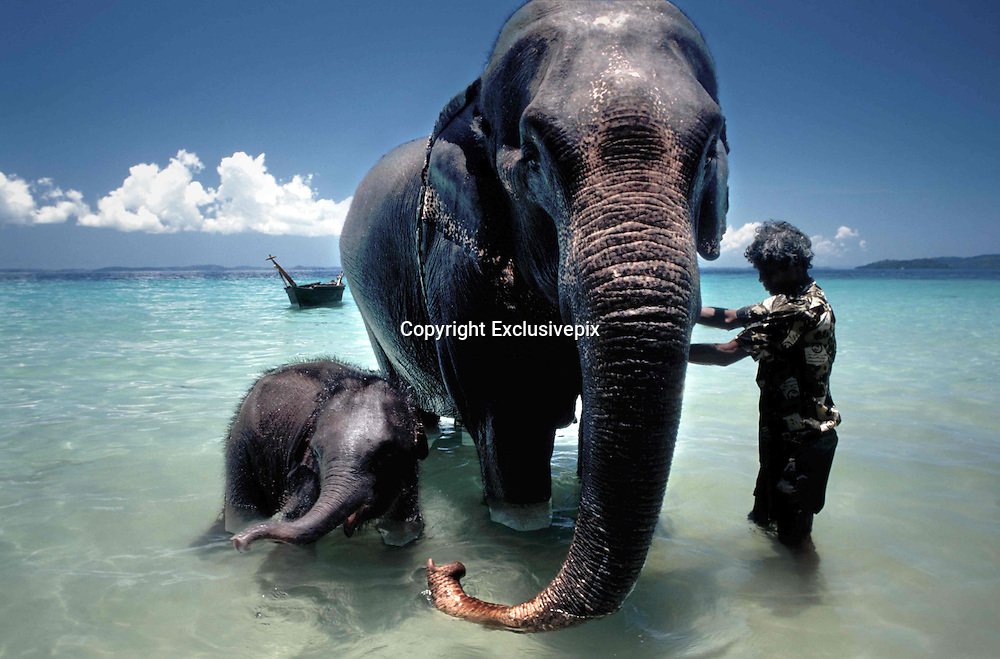