sounds crazy but this actually happens in the US and Japan.
Squirrel fishing is the sporting practice of "catching" squirrels and attempting to lift them into the air using a nut (preferably a peanut) tied to a string or fishing line, and optionally some kind of fishing pole.
There has been some debate over where squirrel fishing originated. The practice was popularized either by Nikolas Gloy and Yasuhiro Endo, at the Division of Engineering and Applied Sciences at Harvard University, and by the Berkeley Squirrel Fisher's Club (BSF).
Anyone can pull a nut from the hands of a squirrel, but the adept squirrel fisherman must tune his craft, maintaining balance between himself and the squirrel, and eventually rewarding the squirrel for his valiant competition by ceding the nut. Ideally, great care is taken not to overfeed squirrels, not to hit them with nuts, and not to treat them roughly (though verbal abuse is encouraged).
A squirrel being successfully lifted - you know that you are a true professional when you can lift a squirrel more than a foot off of the ground!    Another variation on the sport is creating a large circle in the grass, and enticing the squirrel and catching them in the circle, or the variation of catching the squirrel and depositing them in the circle.
©squirrelfishing/Exclusivepix 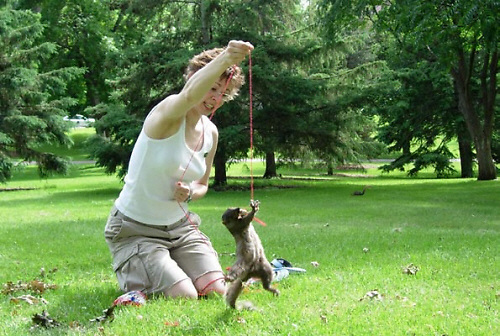