Pigs swim in sea in Bahamas Swimming pigs have been photographed taking a dip in the tropical waters of the Bahamas.

Pigs swim in sea in Bahamas
Swimming pigs have been photographed taking a dip in the tropical waters of the Bahamas.

The family of brown and pink boars and piglets live freely on the sandy white beaches and even swim in the surf on Big Major Spot Island.
They are such a familiar sight at the spot that locals have named the area "Pig Beach."
And they were snapped by underwater photographer Christopher Dorobek who stumbled across the unusual residents during a diving expedition.
"We were in the southern Bahamas to photograph oceanic white-tip sharks,"
"Our captain, Jim Abernethy, had heard that there were pigs on Big Major so we decided to go and check it out.
"Upon approaching the white sandy beach, it is easy to spot the pigs - both pink and dark brown - laying in the sand.
"You never know what you'll see when you're out tracking down wildlife."
Pigs are omnivorous animals found throughout Africa, Europe and Asia. However one species, the domestic pig (Sus Scrofa), are found almost worldwide as a domestic and feral species.
"I'm not sure how these domestic pigs (gone feral) came to live on this particular beach in the Bahamas, but they are well-known to locals, who have been feeding them for years," says Mr Dorobek .
"Because locals bring food, the pigs will run into the water and actually swim out to the oncoming boats, as if to greet them individually.
"It is strange enough to see pigs laying around on tropical beaches of white sand, but to see them then charge into the water to greet oncoming boats is just bizarre."
©Christopher Dorobek/Exclusivepix 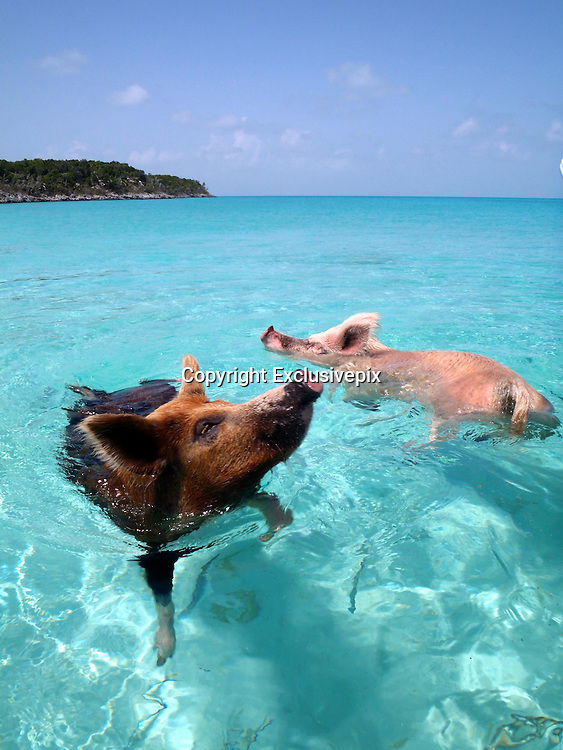