BOY WITH FOOTBALL-SIZED TUMOUR IN HIS TUMMY

BOY WITH FOOTBALL-SIZED TUMOUR IN HIS TUMMY

This four-year-old boy gets teased because he looks like he's pregnant - but it's actually a giant tumour in his TUMMY.

Kittipat Jintana has had the painful cancerous growth in his stomach since he was just one-and-a-half years old.

Despite having medical treatment, the tumour has continued to grow and is now almost as big as a football.

Harrowing pictures show the extent of the cancer - and Kittipat is no longer able to stand up or go to the toilet properly.

Relatives have now made a desperate plea for doctors that can help as his cancer is now stage three with fears that it could spread further.

Family friend Pensiri Saenghiran said: ''His parents are no longer together and he has to live with his aunty. He wasn't abandoned by them, but they have a lot of problems so can't take care of him fully.

''We look after him, too. He's desperately in need of proper medical attention. Other children call him pregnant but they don't know how sick he is.''

Kittipat developed the growth almost three years ago. He's now four years and four months old - and the condition has continued to get gradually worse.

While in government hospitals patients such as Kittipat can be left to deteriorate unless they have money to spend on care.

Pensiri added: ''We have been taking Kittipat to hospital but his condition is getting worse. He is really ill and we're hoping for an expert doctor or consultant who can help him.''
©Exclusivepix Media 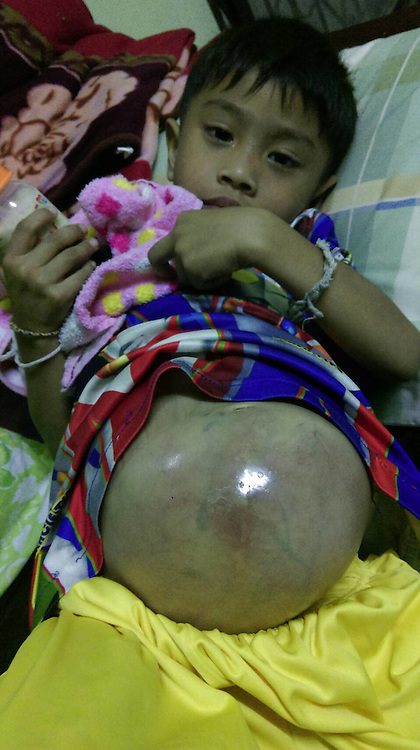