Dog Adopts Orphaned Opossums, Takes Them For Rides On Her Back

Dog Adopts Orphaned Opossums, Takes Them For Rides On Her Back

Last month, tragedy struck a group of helpless baby opossums when, sadly, their mother was attacked and killed on a property in Brazil. Fortunately, someone discovered the orphaned offspring, their eyes still not yet open, and gave them to pet behaviorist Stephanie Maldonado for safekeeping. Initially, Maldonado had hoped to take the baby opossums to a nearby wildlife rescue group, but was told that they were too full to accept any newcomers. So, she took it upon herself to keep them cozy and fed. The animals required feeding every two hours, but it was still uncertain if the opossums would survive without more motherly attention than Maldonado could provide.

That's when her dog, Pretinha, stepped in.
The sweet-natured pup apparently sensed the little opossums were in need, and began doting upon them as if they were her own.

"It's very nice to see all the care that she has with them, licking them all the time and nestling them," Maldonado Pretinha clearly enjoys her new maternal calling. Perhaps most incredibly though, the dog is more than happy to embrace her adopted litter's un-puppylike instinct to climb atop their mom. In fact, Pretinha seems to enjoy that part too. The dog is so accepting of letting the opossum orphans climb on her that she even takes them on rides during her walks, just like a real opossum mother.
©Stephanie Maldonado/Exclusivepix Media 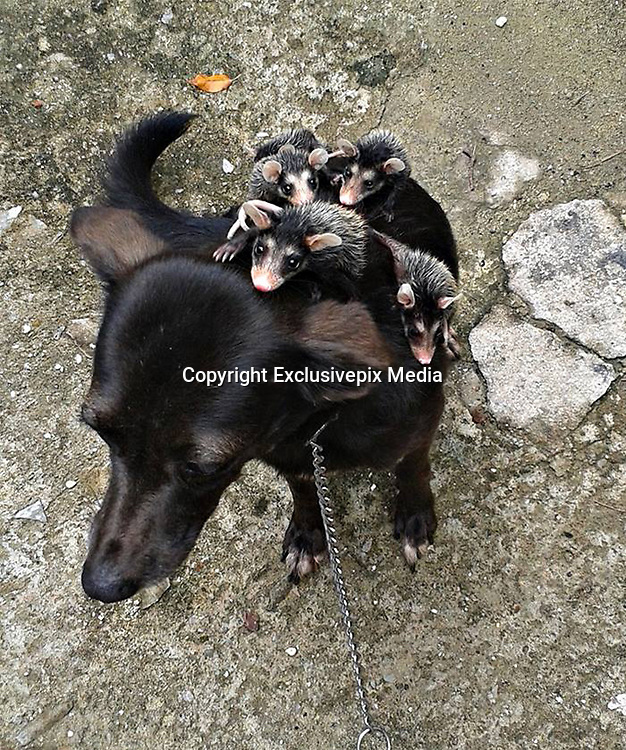