'I just saw it as babysitting': Woman, 49, gives birth to her GRANDSON after being surrogate for daughter with heart condition

'I just saw it as babysitting': Woman, 49, gives birth to her GRANDSON after being surrogate for daughter with heart condition

A 49-year-old northern Maine woman kept her word to act as a surrogate mother, and has given birth to her grandson.
Linda Sirois of Madawaska, carried and delivered baby Madden Hebert, because her daughter Angel Hebert, 25, has a heart condition which would make pregnancy unsafe.
Seven pound, 14 ounce baby Madden was born Aug. 13. His mother says he's 'eating like a champ and he doesn't fuss too much.'
Sirois said she's offered for years to become a surrogate mother for Angel her if a doctor said she shouldn't become pregnant. Hebert, of Presque Isle, said she and husband Brian Hebert got that word last summer.
Angel's egg, fertilized with Brian Hebert's sperm, was successfully implanted.
'It was all pretty simple as far as I was concerned,' said Linda to the Portland Press Herald.
With her daughter's heart condition ruling out a 100 percent safe pregnancy, Hebert decided to ask her mother if she would be willing to act as a surrogate.
'It was pretty disappointing and we were pretty upset about it,' said Hebert.
'But we kind of had an idea that it was a possibility and, all along, my mother was saying, 'I'm here and I can carry for you.' I guess we didn't really take her seriously.
'I called her last summer and I'm like, 'So, you know that offer you've been offering? Is that offer still on the table?'
Unfortunately most of the fertility clinics in the area turned Sirois down.
Eventually the Reprodcutive Science Center in Lexington, Massachusetts accepted the nearly 50-year-old Sirois, on stringent conditions.
Implanted with her daughter's fertilised egg, Sirois became pregnant during the first round of IVF treatment.
Sirois described the pregnancy as the easiest of her previous three, with no morning sickness or complications.
'I didn't have any young children around -- my youngest are in college -- so that made it easier,' she said.
Deliv 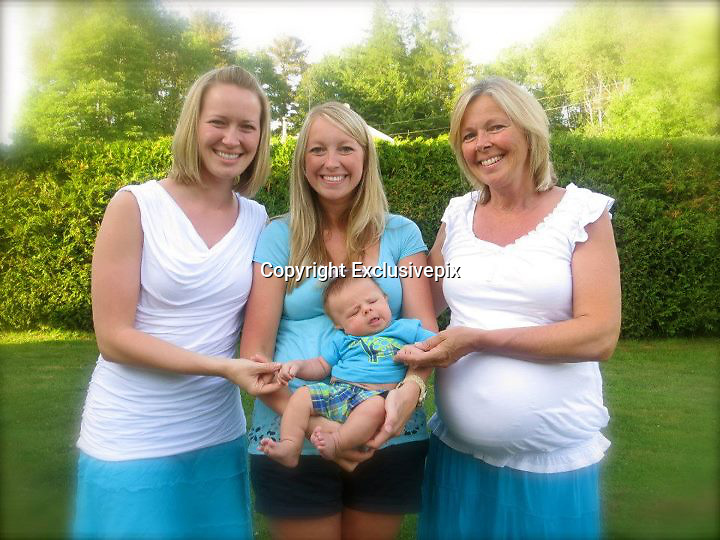