Few animals are as under appreciated — or outright maligned — as the countless pigeons with whom we share our cities and suburbs. But fortunately there are people who believe that, no matter how common, every one of those humble birds is still very much worth saving.
This fledging baby pigeon was rescued last month by two pedestrians who found her injured on a sidewalk in Oakland, California. Seeing her twisted neck, they weren't sure at first if she was even alive — until she began to peep.

Rather than leave her there to suffer all alone, the Good Samaritans rushed her to WildCare, a clinic that specializes in treating injured wildlife. And it's a good thing that they did.

"We're one of the only wildlife hospitals in the Bay Area that will actually treat pigeons," Melanie Piazza, director of animal care "Most euthanize them as 'pest' animals. We treat everybody, so she came here."

Soon after, an X-ray revealed that pigeon had suffered a broken neck, perhaps by crashing on her maiden flight, or at the hands of a cruel person who'd discovered her vulnerable on the ground. "We weren't sure if she was going to make it," said Piazza. "She was a long shot. Any living being with a broken neck is in trouble. But with the fact that she could still use her legs and her wings, we thought she had a chance. Her spinal cord wasn't severed, so we thought we'd try to help her."

That part would take some improvising. The pigeon's caretakers devised a neck brace out of padding used for casts and pink medical wrap, light enough so she could still walk around as she healed.

"We wrapped it behind her back and behind her wings — like suspenders, to hold her head up," said Piazza. Given the seriousness of the injury, WildCare staff expected her recovery to take weeks, if not months. But the pigeon proved them wrong.

Four days later, while refitting the neck brace, it was discovered that the bird was now able to hold her head up nearly all the 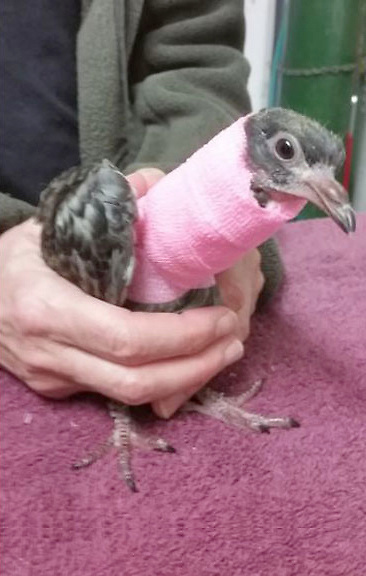