cyclist has tree through his lower leg

23/09/2008 - USA
Proof that some painkillers really do work no other way this chap could give this victory sign with a tree through his lower leg. He is a cyclist who suffered a freak accident while on an open train with friends. A pal in front kicked up the branch and the victim, named only as Bob suffered the consequence. From ride strong website, the author writes: The guy he was riding behind ran over a large branch which kicked up and impaled Bobs leg when he ran into it. The medics had to cut the ends of the branch off to get him in the ambulance. They have him on heavy-duty antibiotics. They did not place any screws to set the broken Fibula, fearing that disturbing the bone might complicate contaminants getting further into his body.
The prognosis is good. He has to go back to the trauma surgeon to work out plans for a skin graft. Apparently there may have been a line of riders, maybe six to 10, two abreast, going approximately 25 mph, and the riders bike in front of him kicked up a branch, and you can see the results. The branch did not have a spear point at the end that went through his leg. That is why it broke his bone. Imagine the pain. This happened a couple of weeks ago. He is going to be fine. Be careful while riding your bike. You never know what can happen. And his son, writing on a social networking site added: This happened after a particularly bad wind storm came through Southwest Ohio and Central Ohio and downed trees and branches galore around Cincinnati. It also knocked out power for a huge chunk of Ohio a little ways north of us.The freak bike accident happened in a part of town called Loveland, which has a great bike trail. He was indeed with some members of a group he rides with called Gears for Beers and was towards the rear. A rider in front of him rode over a branch which broke it at an odd angle. My dad was riding behind with his cycling shoes latched in to the pedals and the up-angled end of the stick hit him in the leg, cleanly impal 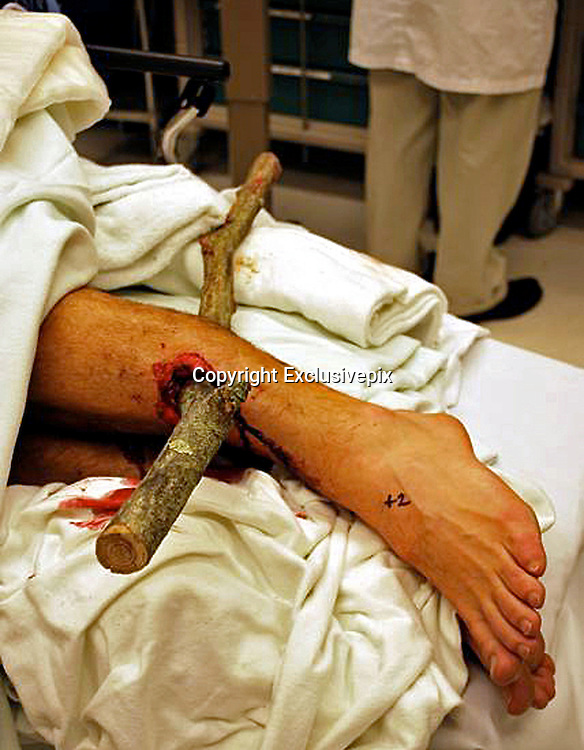