About 7,000 feet offshore of Sunrise Boulevard off the coast of Fort Lauderdale, Florida, lies an underwater wasteland of rotting tires. This is Osborne Reef, an underwater cemetery of 2 million tires that were placed there in the 1970s as a part of a failed ecological operation to create an artificial reef. Over the years, many of the tires were dislodged by tropical storms and hurricanes and caused damage to nearby existing coral reefs. Forty years later, the tires are still there causing more harm than good in the coastal Florida waters.

Osborn Reef was the brainchild of a non-profit group called Broward Artificial Reef, or BARINC, composed of a group of fishermen, back in the spring of 1972. The idea was to create a reef using old tires that were piling up around the county's landfills and rural areas. This was before recycling caught on. They were convinced that corals would attach and grow on the tires and provide additional habitat for marine life. It was a well intentioned but not a particularly well thought out plan.
With the support of US Army Corps of Engineers and more than 100 privately owned vessels, placement of the tires began over 36 acres of the ocean floor, 7,000 feet offshore in 65 feet of water. The Goodyear Tire and Rubber Company provided equipment for the auspicious undertaking, even supporting the project so far as to drop a gold-painted tire to christen the site. The tires were bundled together with steel clips and nylon rope and lowered onto the sea floor. However, the saline waters of the ocean quickly corroded these materials causing the tires to separate, and carried them away by ocean currents and waves. The tires, with their newfound mobility, not only destroyed any marine life that had thus far grown on the tires, it effectively prevented the growth of any new organisms. Besides, the loose tires scoured the ocean floor and damaged existing reefs in the area. Thousands of tir 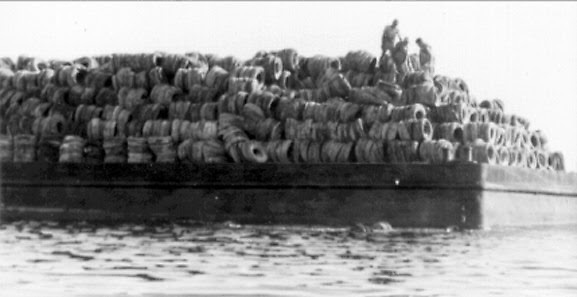