Surprise! Woman goes to hospital thinking she has kidney stones...but leaves with a BABY boy after finding out she was 38 weeks pregnant

Surprise! Woman goes to hospital thinking she has kidney stones...but leaves with a BABY boy after finding out she was 38 weeks pregnant

One Georgia woman went to the hospital with what she believed were kidney stones, and left with a newborn baby.
Stephanie Jaegers got the surprise of her life when doctors at Piedmont Henry Hospital in Stockridge informed her she was 38 weeks pregnant.
And, they added, the baby was coming - in 30 minutes.

Stephanie, who had been suffering from abdominal pains, had immediately said no when doctors first asked her if there was a chance she was pregnant.
There had been no morning sickness, no weight gain. Earlier that year, Stephanie had been diagnosed with pre-menopause. She hadn't missed a single period.
The doctors began preparing Stephanie for a CAT scan, but when one examined her stomach he ordered an ultrasound instead.
'It wasn't until we heard the heartbeat that reality set in,' Stephanie's husband Michael Jaegers told WXIA.
'There are no words to describe the range of feelings associated with being told that you're having a baby - in 30 minutes.'
But the parents, who already had three children back home, didn't have much time the news sink in. Shaun Jude Jaegers was ready to arrive into the world.
The healthy baby boy was delivered at 3.50am on Wednesday at 7 pounds 3 oz and 19 inches long.
Doctors later told the parents that Shaun had been a breech baby throughout the entire pregnancy, meaning he was delivered feet-first rather than head-first.

The position limited Shaun's ability to move and is also the reason why Stephanie didn't 'show' during her pregnancy.
Michael revealed on Facebook that the hospital also explained that, although a menstrual cycle is rare during pregnancy, 'it can happen'.
Stephanie had also broken her ankle just a couple weeks before, limiting her movement as she allowed the injury to heal.
And the mother had been told nearly three years ago that she would likely be unable to have a 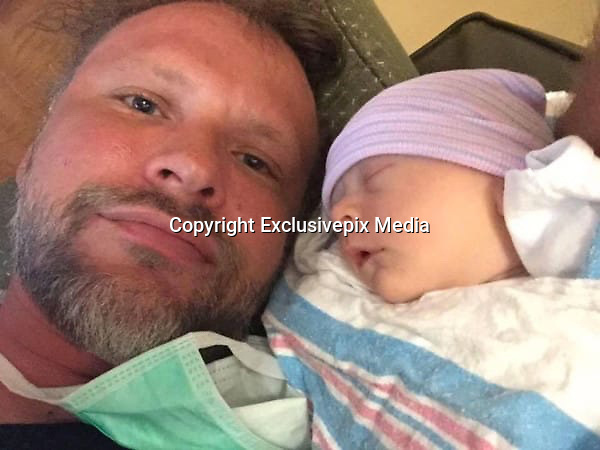