But he showed his kind, gentle side during a break in shooting in early August when he and Berry visited a community upliftment project in an informal settlement/squatter camp in Khayelitsha, a 15km² urban sprawl of tiny houses and thousands of wood and tin shacks that share communal toilets..

As soon as he arrived at the Indlovu Project in Monwabisi Park Martinez connected with a group of underprivileged children who flock to this oasis in a township where 55 percent of the half-a-million residents live below the poverty line and only about 20 per cent of adults are formally employed.

The project includes a clinic, a youth centre, an education centre, a skills development workshop, a large community hall that also doubles as a cinema, a small shop and a crèche.

“Olivier took off his socks and shoes and got totally involved in playing with the kids,” said Martinez and Berry ’s host for the visit, Di Womersley, CEO of the Shaster Foundation which manages the Indlovu Project.

“The kids loved him. And a few days later he sent us punch bag and two sets of boxing gloves with a note that read: ‘Boxing equipment for the boys of Khayelitsha from Tattoo Man’. He told me that he’d rather the boys punch the bag than each other.”

While Martinez kicked around in the dust, Berry toured Indlovu with Womersley.

“I really, really am thrilled,” said Berry . “And I'm so impressed with all the work that’s being done here and the love and the passion that Di has for the work that she's doing here.

“It makes my heart feel good,” added Berry . “There's sadness too that I feel. 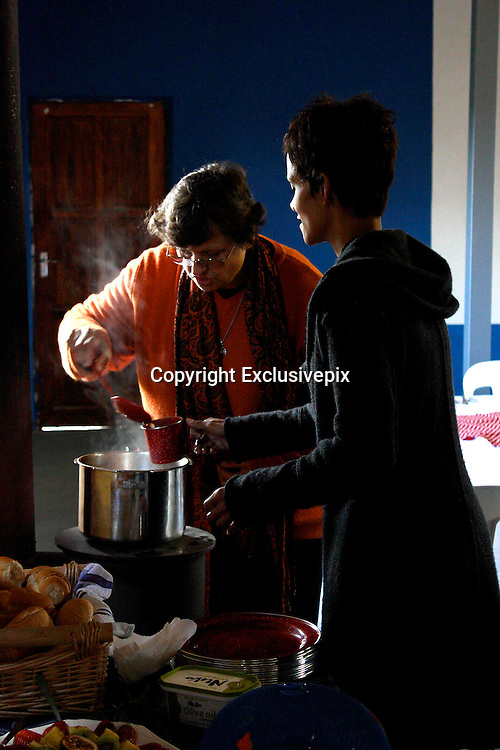