These bizarre pictures show skin from an ancient burial site that was kept in tact - thanks to a weird black magic tattoo SPELL.

Authorities unearthed the corpse when they were cleaning a remote cemetery in Mukdahan on the border of Thailand and Laos.

They were amazed that the skin was still in tact - hanging loose around the dead man's skeleton.

Incredibly, dozens of tribal bamboo inkings done while the person was still alive show a black magic spell for nothing to ever penetrate the skin.

Excavators believe the Sanskrit writing and pictures of the tiger ensured the man's body stayed together and was prevented from rotting.

But in a cruel twist, it may have been the supernatural spell that killed him - it made the skin so strong he couldn't have an operation for fatal appendicitis, according to rescue organisation Goopaitongdaeng Jeemokkho Goopainueng Soonpaed (CORR).

They said: ''The authority cleaned the cemetery with local people and volunteers and they found the skin of an old man who died of appendicitis.

''However, he couldn't have surgery because the skin was too hard to cut and he ended up dying in agonising pain from the illness.

''The skin has a lot of tattoos and it hasn't gone rotten. The spell to protect him and make him strong prevented the operation and then after he died stopped his skin from rotting.''

Deeply superstitious Thais - the majority of whom believe in ghosts and reincarnation - were amazed when the images emerged.

Suriya Rachatawet said: ''This is amazing. It shows that magic spells really do work.''
©Exclusivepix Media 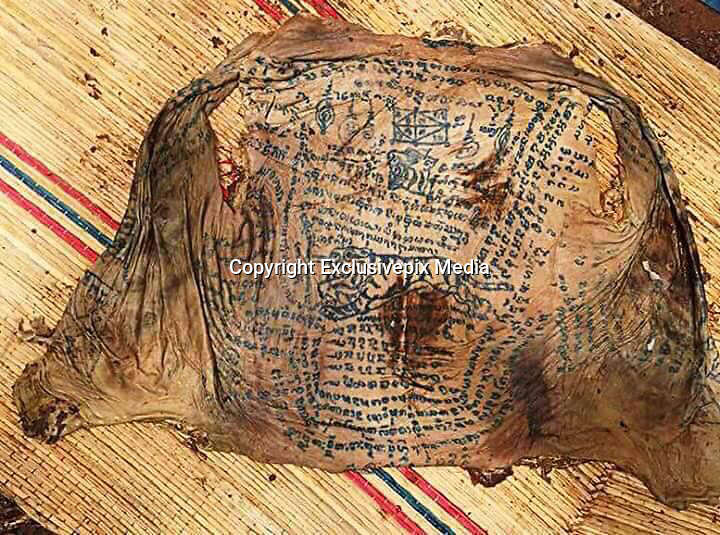